Great Leaders Want to Spend Time Listening to Others – Week 33 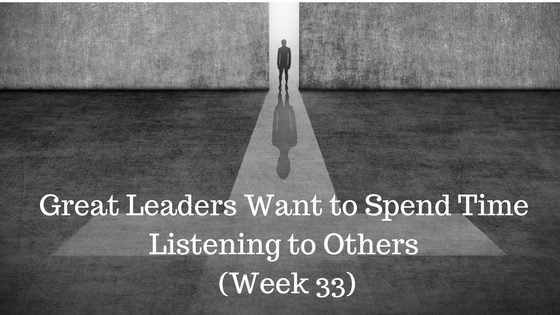 “You’re short on ears and long on mouth.” ― John Wayne 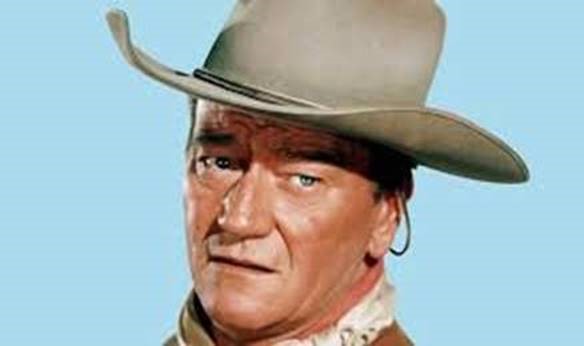 Listen More Than You Talk

This idea begs discussion of Stephen R. Covey’s 7 Habits:  Seek first to understand, then to be understood.  This single truth makes strong and obvious sense; yet is still far too often ignored by bosses, spouses, team leaders and employees.  Obviously, we don’t learn new ideas while our own mouths are moving.  We learn when we listen intently.  Stop multitasking.  Stop texting.  Listen genuinely and deeply for the precious time you are interacting with others – your brain will explode with the new ideas and new approaches you’ll learn as well as the sensitivities you’ll gain about how to turn those ideas into action.  Each individual is different in his/her thinking and motivation – aren’t you?  These are critical details that you miss entirely when you jump in too quickly to speak.

The temptation to speak is great, at least it is for me.  I have trained myself to put my finger over my mouth when I want to listen.  It reminds me to keep my mouth shut.  There will always be time for me to talk.  The time to listen is precious, and if you interrupt it, you’re going to miss important and valuable information.  Take notes, look at what the person is saying.  Take your time to respond.  Better to delay a response than to say something stupid.

Sometimes, I think people hesitate to listen because they are afraid that by listening, they will doubt their own beliefs, get confused, or start to see someone else’s side (and lose the argument/debate).  Our unwillingness or inability to help others influence us (a good thing) prevents teams and organization from achieving better results.  Great leaders welcome others’ influence.  But, they know how to discern between real insight and hot air.  Unless you are genuinely open to being influenced by others, any leadership approach you use that relies on your team’s collective knowledge is likely to fail.

How Great Leaders Use the Power of Listening

Great Leaders tell you what will influence them and will help you make your case.  They tell others what kind of information will help you change their mind.  For example, when your CFO tells you that you must reduce headcount immediately, but you disagree, you help make his/her case by saying something like, “I was disagreeing with you because I thought you were saying we’re facing two-quarters of lower earnings.  If that’s the situation, I’m willing to deal with the Wall Street analysts.  But, if you’re saying we’re really looking at four quarters of lower than expected earnings, then I’m willing to make cuts now.  Help me understand, is it two, four or some other number of quarters?  And, what’s your projected time for getting back to our current headcount?”

In case you’re wondering why great leaders help others to persuade them to see something different, you have arrived at the secret of the skill:  their mindset.  They don’t see different viewpoints as opportunities for losing an argument and being wrong, rather than as opportunities for learning and gaining deeper insight.  They see being influenced as a strength, rather than a weakness.

If you’re a leader that is open to being influenced, then you should work hard to make it as easy as possible for others to provide the kind of information that would best influence you to make decisions.  The more others know what will influence you, and the more you help them articulate their case, the sooner you can decide whether that information and reasoning warrants changing your mind.  Until your interest in being influenced by others is at least as great as your interest in influencing others, you’re missing half of what it means to be a leader.  And, those who report to you can feel its absence.

There is an author named Tom Peters that did research and revealed that 75% of the most recent and innovative inventions came from outside the profession.  IBM wouldn’t listen to either Steve Jobs or Bill Gates.  What did they miss out on by not listening to them and their ideas?  Ouch!

Jesus was constantly asking his disciples what they were thinking – “What do you want?”  He encouraged them to ask for anything they wanted and to be very specific in doing so.  In Matthew 7:7-10, Jesus said, “Ask and it shall be given to you.  Knock on God’s door and He’ll open it.  Would a son ask his father for bread and be given a stone?  Or, if he asks for fish, would he be given a serpent?”  The whole underlying theme of the Bible is to teach people that God is a loving God and that he is eager to love us and give us things.  There seems to be a yearning from God to hear from us.  We learn in scripture that He is very interested in our ideas and thoughts.  He wants to hear from us – often and in the raw!

If Jesus shows us that it is good to be open to people’s thoughts, problems, ideas, and requests shouldn’t a great leader be the same?