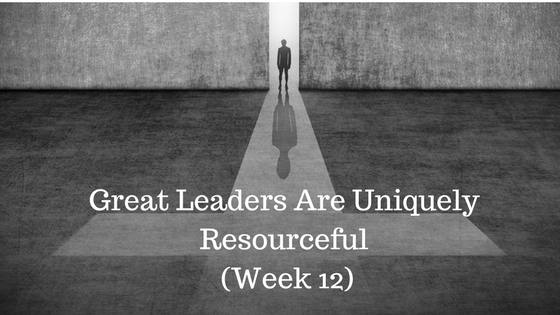 Great leaders are very much in touch with their resources, and they understand how to leverage them.  Jesus created whatever he needed from things that were already there.  He didn’t create things out of thin air or need to acquire things.  He simply took the resources available to him and then tailored those resources to achieve a certain purpose.  Probably the most famous example of this is when Jesus made one loaf of bread feed thousands of people.  Another example is in Mark 2:1-5, Jesus was preaching inside a crowded house.  A disabled man could not get through the doorway to get healed.  The man’s friends cut an opening in the roof and he was gently lowered into the house, right in front of Jesus.  The man was then healed and praised by Jesus for his inventive demonstration of faith.  Creative problem solving is good!

There is a very common belief that hard work is the surest route to success.  Certainly, I am not against hard work.  In fact, I believe that 6 days of hard work each week is both good and consistent with the scriptures.  However, if hard work was truly the secret, there would be a lot more successful people.  In the business I am in, I see a lot of very hard working people every day that can’t seem to turn the corner.  I’ve certainly fallen into this trap a time or two (and probably will again).

Where I see people really rise to the top is when they can effectively leverage their assets (a fancier way of saying that they are resourceful).

Now, by using the term “resources” – I am not just talking about the resources that someone owns, I am speaking about anything that can be used to that person’s advantage.  For example, a son might open a business and use his father as a resource for mentoring/wisdom, networking, and reputation.  A guy who makes it big in a sales role might be using his great personality as a resource.  In fact, you can leverage anything, including who you know, where you are located, and what ideas you have.  A critical exercise is to take an inventory of all your resources and to think deeply about how you can use those resources.  Trust me, it’s well worth the time commitment to do this.

Being resourceful can also be fun!  Have you ever heard of a “hack”?  There are multiple TV shows that tell great stories and have cool demonstrations of how to use readily available resources and “repurpose” them to serve other purposes.  I even saw someone make a working urinal out of a beer keg!

By far, my favorite example of being resourceful is the genius device that saved the Apollo 13 crew from dying in their emergency return to Earth, as photographed during that trip using one of their Hasselblad cameras.  After Mission Control decided to cancel Apollo 13’s moon landing following an explosion of an oxygen tank in the Service Module, the astronauts moved to the Lunar Module in order to save power that was going to be needed later for re-entry. The only problem with this plan was that the Lunar Module was designed for only two people for a 36-hour period, not three astronauts for 96 hours. They quickly discovered that carbon dioxide was building up fast, putting their lives in extreme danger. They had to change the circular CO2 scrubbers in the Lunar Module for clean ones, but they only had spare square CO2 scrubbers from the Command Module.  In record time, the Crew Systems Division put together an improvised adapter using all sorts of weird and random parts, like a flight manual cover, suit pants, and socks.  CAPCOM (Capsule Communicator) transmitted the instructions to the astronauts in order to assemble this “mailbox” rig—as they called it—working against the clock and trying to survive the effects of the poisonous gas which was quickly asphyxiating their brains.  Talk about being under pressure!  Wow!

Sam Walton, the man behind Wal-Mart, is another great example of a resourceful leader.  Growing up during the depression, he used to milk the family cow and then bottled and sold the surplus.  He later decided that the retail sales market was overpriced.  He decided that he could figure out a way to sell merchandise people could actually afford.  He took what was already in existence in the sales retail market and improved on the concept (in small towns across America).  He eventually became the second-richest man in the world.

Great leaders see ways to use the resources they have in order to create solutions to problems and to drive forward an agenda.  Resourcefulness is, for all intents and purposes, the ability to quickly, and often cleverly, find ways to overcome difficulties and problems.

Our entire economic system rewards resourcefulness.  A capitalist economy that rewards the best provider based on competition demands resourcefulness and eventually weeds out those that are not.  The most resourceful people will win because they will eventually win the competition.  Doing more with less is how you can create profits which can then be reinvested into a company to make it stronger and stronger.  Companies often start to fail when they lose their ability to be resourceful (aka wasteful).   Another competitor who is more resourceful is waiting in the wings, making itself stronger and stronger.

We discussed Jesus’ ultimate act of resourcefulness in week 1: