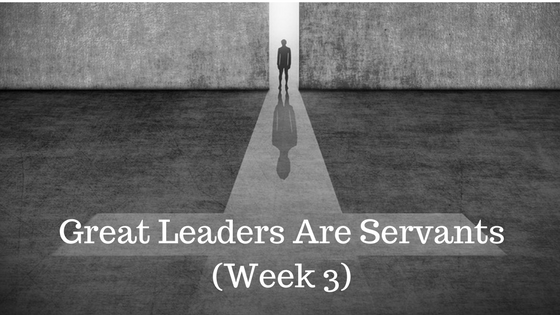 I’ve heard a lot of business owners and CEOs talk about how they enjoy not having to report to anyone at work. Or, how they are sometimes lonely or unfulfilled because they don’t have anyone to pat them on the back, mentor them, or be their “partner”.  I think the old saying goes “it’s lonely at the top”.   Well, I think that can certainly be true, if you falsely believe that you are indeed “at the top”.

I believe these people are really missing the mark on this topic for two reasons:

But, this doesn’t make what I am talking about any more true; there is plenty of proof to back up this claim and there is a reason that servant leadership works.  It’s actually more of a pragmatic and results-oriented strategy than many realize.

In the book “Good to Great” by Jim Collins, they describe what is called a “Level 6” leader. This type of leader is touted as being the cornerstone to great (not just good) companies.  Level 6 leaders are humble and often see themselves as servant leaders, with their sole purpose being to serve their management teams.  Level 6 leaders do whatever they can to allow their teams to flourish and care little about getting the credit for it.  They also like to stay “behind the scenes”, and are certainly not ego-driven.  They tend to be the type that speak softly and carry big sticks, but they are also supportive and empathetic.  So, if you want to read a very secular, data-driven book about this topic, I recommend you pick up “Good to Great” to discover a deeper understanding of why servant leadership works (it’s not just a spiritual thing).

There is also a very dangerous flip-side to this.  That being, the opposite of servant leadership.  When anyone starts to truly believe they have nobody to answer to, it can take them to a very perilous and dark place.  Pride begins to creep in – and humility begins to fade away.

Some of you will know the name Ed Koch very well.  Ed was a famous and beloved mayor of New York City for many years.  Ed was famous for going around the city and asking people “How am I doing?”. The people in New York loved him for this!  Mayor Koch was clear on who his bosses were.  It was the people of New York!  This is the type of leadership I am talking about.

In another example, the founder of USA Today, Al Neuharth, used to drive around the country asking people (his customers or potential customers) what kind of newspaper they would like to read.  He considered these people to be his bosses!  And, wasn’t he right?  I mean, ultimately, these are the people that were paying his salary!

Now, think of someone that doesn’t respect their “bosses”.  They are at the top, and they actually believe that lie.    We can all think of an example, past or present.  Do you consider them “effective leaders”?  I would bet not.  But, guess what?  They probably think they are.  That’s why they believe they are at the top.

Now, if anyone could ever claim to not have a boss, it would be Jesus.  There has never been anyone on this Earth that would have more claim to that than him.  Assuming this is true, which we will, Jesus actually made it crystal clear that he had a boss!  And, furthermore, that he held servant leadership to be of very great importance.  Jesus made a big and somewhat ceremonial point of washing the feet of his disciples in order to drive home this very concept (less they become arrogant as a result of their association with him).

The point is very clear – nobody is above service and, everyone has a boss.  We are all called to serve, no matter how high a position we are!

Now, Jesus knew that his boss was the father, God himself.  Jesus hit his knees daily, usually for hours.  Nothing was to interrupt the prayer time that was predesignated, set aside, and honored.

There is something that is both very healing and very personally fulfilling about serving others.

In the 1930s, there was a group called The Oxford Group that gained enormous popularity and success, being based primarily on a “moral re-armament”.  This group had various idiosyncrasies, and I am not necessarily endorsing them, but their methods were largely based on people developing a relationship with a “higher power” (meaning Christ to the Christian), humbling themselves to this higher power, and changing their psychology from a “me” focus to a “serving” focus.  This “psychic change” inspired many lives, and it ended up drastically changing many lives (for the better, of course).  In fact, the group and their beliefs inspired one Bill Wilson, who eventually co-founded a group called “Alcoholics Anonymous”.  Bill believed in very similar principles as a means of recovery from addiction.  Bill believed addiction to be a “spiritual disease” and that it was rooted in a fundamental flaw in certain people that led to a certain “darkness” inside them.  This darkness led to behavior that was irrational, resulting in people looking to fill this darkness and pain with things other than what one would consider “savory”.

I bring some of this history to you mainly to explain that there is something very powerful about serving others (and very healing), as opposed to serving oneself.  Personally, I believe that if someone is living to serve themselves, they will not be an effective leader in the long-term (not to mention having a very unfulfilling life).

At least, I have not seen any examples of this.  But, I have seen a lot of examples, both subjective and objective (with real financial data), where servant leaders have led organizations that have greatly outperformed the average.

Jesus’ natural desire to humble himself, serve others, and make it clear that he reported to the father (God) is very important.  If you want to lead like Jesus, then you need to understand why he was effective.  Servant leadership is a big part of that.

Have you ever worked for someone or been part of an organization where you were very clear that the “leader” was in it to serve themselves?  How did that make you feel?  Did you feel inspired?  Did you feel purposeful?  Of course not!

Real leaders are humble.  They know that they have a boss.  They respect the people that put food on their table.  Jesus taught us this very deliberately.  We should take very important note of this.

Again, this is not a spiritual argument.  The facts speak for themselves.  Servant leadership works.  Check out your history and the companies in the past that have very much outperformed other companies.