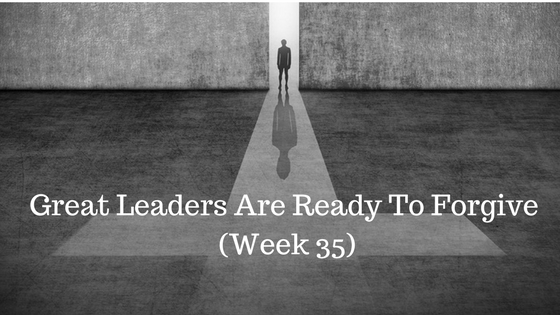 There is an old Buddhist saying, “You are not punished for your anger.  You are punished by your anger”.  In my own life, I have found this to be particularly true.  Anger doesn’t hurt anyone but the person feeling it.  And, anger is not productive.  It is actually very destructive.  Sure, we all feel it, and that’s natural.  But, when we learn to forgive, and forgive quickly, we can maintain stability, clear thinking, and productivity.

When a leader likes to punish for mistakes, micromanage people, and assess blame, the organization usually is going nowhere.  They may have had some prior “success”.  But, they have hit a ceiling, and they will never break through it.  Organizations need to be mindful to reward people for failure.  Failure means risk, and without it, there is no progress.  If the people in an organization are afraid of making mistakes, the organization will never grow or flourish.  Want to know if you can trust the people that surround you?  Take a risk.  Fail.  Then, see how they react.  Are they forgiving and supportive?

“The weak can never forgive.  Forgiveness is the attribute of the strong.” Mahatma Gandhi

Great leaders know that they need to create a culture that has the innate ability to forgive.  Forgiveness creates forward motion.  One of the reasons people follow forgiving leaders is that they know that when they make mistakes, those leaders want to help them overcome their failures and learn new skills to avoid making the same mistake again.  Forgiveness doesn’t mean that you should be a doormat, or not use discretion in whom you deal with and how you deal with them.  Forgiveness is allowing others to take risks and make mistakes, while all of you keep moving forward.

Abraham Lincoln’s philosophy on forgiveness was both public and profound.  Just before he was assassinated, he publicly preached the need for mutual forgiveness from the North and South.  He was heavily criticized for endorsing forgiveness toward the Southern rebels.  An overwhelming majority of his constituents believed that the Confederates were the enemy, and they should be destroyed.  To this, Lincoln responded, “I destroy my enemies when I make them my friends.”

Great leaders know that you should never treat a human being in a way that makes them feel inferior.  This begins with how much we respect ourselves.  If we do, then we can also extend respect to others.  When we make amends and forgive ourselves, we naturally develop compassion and empathy towards others, which I believe is one of the most important components of leadership.  If revenge is not justice, it’s definitely not a strategy.  I see this quite often in business when key people are “pushed out” of a company.  They go start their own companies with the idea of getting revenge on their former company.  This is not a business strategy and that particular business will never flourish.   Anger and blame are unproductive emotions that tie up energy in destroying rather than creating.  Better to forgive, move on, and develop a new strategy to find purpose and meaning in your own work life.

Those whose main motivation is to settle scores and get payback — to obstruct rather than construct — are repeatedly on the wrong side of history.  Taking revenge can destroy countries, companies, and relationships.  Forgiveness has the power to rebuild them.  Something that really bothers me is when forgiveness is seen as a weakness, chosen by those who lack the “stomach for confrontation” and as such give up an opportunity for hard-handed justice.  In truth, forgiveness is a strength, which is why so many struggle to fully embrace it.  The benefits to forgiveness are undeniable.  If everyone found it easy, then everyone would do it.  This must mean that it takes strength to exercise it.

Jesus is the ultimate example of forgiveness.  He continued to believe in his followers and kept giving them second chances.  I can picture Jesus often repeating the phrase “Nope, try again” over and over and over.  Even after Peter denied him three times, as Jesus foretold, he still forgave Peter and loved him anyway, as if he never had even denied him.  He forgave Thomas for doubting, even after he came back to walk on the Earth.  The truth is, without forgiveness, we are doomed.  We all need it because we all make mistakes.  Jesus taught us that we all screw up, and that we screw up a lot!  Hence, we need to be forgiven.  And, we are, thanks to him.

Get rid of all bitterness, rage and anger, brawling and slander, along with every form of malice.  Be kind and compassionate to one another, forgiving each other, just as in Christ God forgave you. – Ephesians 4:31-32