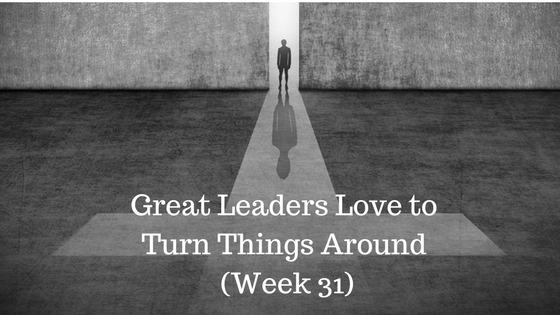 We’re all suckers for a story about a great come back.  We laud business leaders that can bring a company back from the brink of bankruptcy.

Co-Founder Steve Jobs left Apple Computer in 1985 after a struggle with its board of directors.  He came back to Apple in 1996 as interim CEO when the company was struggling and its stock had plummeted.  He became the permanent CEO in 1997.  He got right to work, reducing the 350 projects Apple had in development to 50 and then to 10.  He focused on creating the next big thing and ended up releasing the iMac, the iPod, iTunes, and the iPhone.  He also restored the brand image of Apple.  In possibly the biggest turnaround story ever, Jobs’s leadership drove the stock price up more than 9,000 percent.

Another example of a great turnaround leader is the story of Alan Mulally turning around the Ford Motor Company.  He took over as CEO in September 2006, at a time when the company was clearly broke.  Its stock price had plummeted (the low was $1.01 a share in 2008), its debt was at “junk” status, and 2006 would go down as the worst year in its history with a $12.7 billion loss.  It was widely expected that Ford would need to file for bankruptcy.  However, by the time Mulally retired on July 1, 2014, Ford had achieved a remarkable turnaround, largely believed to be attributable to Mulally’s installation of values-based leadership.

My favorite turnaround has to be related to the Chicago Cubs and the magician, Theo Epstein.  Go Cubbies!!  There is no set formula for a leader to turn things around.  Each situation is different, and the leader must determine the most appropriate methods for the turnaround.  In reality, we are all called to be turnaround specialists.  We all have to face difficult situations, and we all have ups and downs.  Every time we face hardships, we must work to turn things around.  Furthermore, we need to put forth the attitude and belief that things can be turned around.

The world is full of turnaround specialists.  Moms comfort their children when they are hurt in order to turn things around.  Mental health specialists work tirelessly to help people relieve their pain, anxieties, and sadness.  Their entire profession is built on turnarounds.  Mediocre leaders fold and flounder in the face of a turn around.  They can’t inspire a new attitude and direction for a group of people.  Great leaders see big turnarounds as something the opposite of overwhelming.  They see them as energizing and exciting.  They love it.  Turnarounds are where they can show their stuff.

In almost every situation Jesus found himself in, he had to turn things around.  He turned around sickness, he turned around disrespect to the temple, he turned around the people’s views on God’s law, and he even turned around death!  He gave us a new mindset to view turnarounds.  In fact, the word “repent” means to turn around.  People could turn around their entire lives instantly by merely committing to follow Him.  Relating Jesus to turn arounds is not hard.  His entire life was full of turnarounds, and his entire message was about turning your life around and going down a path traveled by very few.  Jesus definitely taught all of us about the possibilities of an everlasting life through the power of a turnaround.