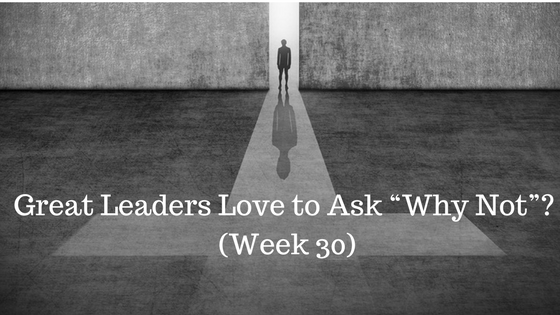 I have a son that can’t stop asking the question “Why not”? I am convinced that this child will put his mother and I in an early grave. He doesn’t like rules. I don’t think it’s because he wants to be a trouble maker. It’s because he doesn’t understand, or like, rules that don’t make sense to him. He doesn’t understand boundaries that seem to impede progress or just flat out waste time and productivity…

“Disruptive Innovation” is a term of art coined by Clayton Christensen. It describes a process by which a product or service takes root initially in simple applications at the bottom of a market and then relentlessly moves up market, eventually displacing established competitors.
Leaders, who drive this type of process are the types of leaders who love to ask “why not”? They are the types of leaders who build cult followings by both their teams and their customers. Asking “why not” most likely is coming from a drive to make things better — to make things more accessible to more people.

Steve Jobs wanted everyone to have access to computers. He posed the question, “Why can’t everyone have a computer in their home that is easy to use?” A simple question! Yet, he was the only one, or one of the only ones, asking it. Too many other people were focused on the question, “Why would anyone want a computer in their home?” They were asking the wrong question, and even worse, this question spurs a negative attitude toward the concept. A dead end, for sure.

Amazon is another good example of disruptive innovation. The internet has had a revolutionary impact on allowing for disruptors, for sure, and this has helped Amazon along. Today’s technology allows for processes and tactics that can crush the status quo of “how things were done”. Amazon took full advantage of this (as did many other disruptors), and they challenged the theory that people only wanted to shop at stores because they wanted to be able to see and try the goods they buy.

I am guessing that Jeff Bezos, the CEO and founder of Amazon, finally put forth the question, “Why not create a company that can supply to anyone, anytime, and anywhere, the exact product they want?” The question seems less far-fetched now, but someone had to ask it. For Jeff, that mission continues. It seems like his next question is now, “Why not create a system whereby anyone can get anything they want, anywhere, in less than an hour?” Is this the question that is prompting the experimentation with drones and/or customized delivery processes? It seems to me that Jeff Bezos wants Amazon to be the world’s “genie in a bottle”. Whatever you wish for, there it is, and it comes in no time at all. He just needs to figure out how to get it to you instantaneously and for no cost. Then, he really will have created the “genie in a bottle”.

I am a person that passionately preaches that people must know the “why” behind what they are doing (see week 26). This goes for everything, including marriage, parenting, work, spiritual, etc. Asking “why” is extremely important. Asking “why” can be good because it can be limiting, which is a good thing. The “why” question is meant to build purpose, clarity and focus. It helps to focus things when they are hectic and confusing. On the flipside, the “why not” question is not for this purpose.
The “why not” question is used to challenge things when they are TOO focused. The “why not” question allows us to break out of traditional paradigms. Personally, I use the “why” question to help myself. And, I use the “why not” question to help others. In my mind, it’s that simple. Asking “why not” is so much more about how you think, instead of what you think.
So why ask “why” when you can ask “why not”? Here’s an example of a wrong question that stirs up a lot of controversies: If there is a God why does He allow evil? Better question: Since there is evil both in the world and in me, why not strive to find a way to overcome it?

Taking it a step further – and making it personal.

In the Old Testament, David saw things differently when all the other Israelites were running scared. They were terrified of Goliath. David asked, “Why not me? No one else is willing to go out there. Why not me?”
The “why not me” question begs a different exercise and deeper dive into our spirituality, but It holds the same concept as our discussion above. The question “why me” can be dangerous. The question “why not me” can be liberating and motivating. I bet that Abraham Lincoln and Martin Luther King, Jr. asked themselves, “Why not me?” I mean, someone has to do it, so why not me?
Jesus most certainly would have to ask himself this question. There is a parable in the New Testament where Jesus tells about a wealthy landowner that entrusts his vineyards to a group of people. The landowner sent his own people to the far country to report back to him on what was going on. They returned with reports of being beaten, ignored, and even stoned. I can visualize Jesus at this point saying, “Father, why not send me?”
Jesus, was, in effect, an invitation to a Great Banquet in Heaven (in the flesh). The only requirement for us to attend the banquet is to accept the invitation.
So, I ask you, when thinking about this invitation, try to ask, “why not me” instead of “why me”?
Even God seems to have asked this question in order to bring glory to the Kingdom.
Wrong (yet, justified) question: Why should I let any of these people into the Kingdom of Heaven?
God’s (both loving and just) question: Why not send them a savior that can die for their transgressions and allow them an everlasting life?
I like God’s question better…..