Great Leaders Know When To Use A Side Door – Week 48 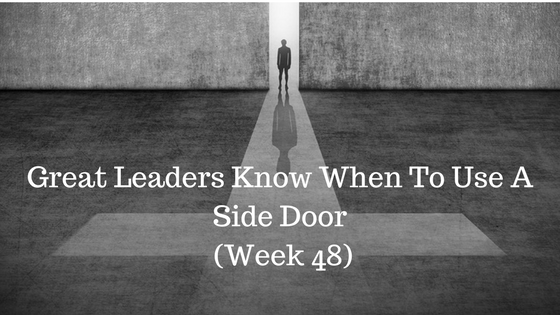 Sometimes leaders need to be especially innovative to get their messages heard or to accomplish a goal.

“If I had asked people what they wanted, they would have said faster horses.” – Henry Ford

Great leaders know they need to be creative.  They have to think outside the box.  Some choose to get rid of the box altogether as they dream up new ways to solve problems.

Roadblocks often come at us without warning.  Often times, circumstances beyond our control prevent us from making progress.  Things can come to a standstill – the path being traveled has now been closed.

Experienced leaders know that this will happen to them more often than not.  They are on their way to making great progress, only to be stopped in their tracks by some unforeseen impediment.

Careful!  Don’t be negative, don’t be angry, and try to temper your frustration.  The reality is that once a roadblock appears if you’re going to make progress on the task at hand, you have to come to terms with the fact that the path you were previously on is no longer an option.  It doesn’t matter why it’s not an option.  It just isn’t.  It’s pointless to get angry.  It’s a waste of time and energy to complain.  It serves no purpose to be negative.  It’s time to reject any negative thoughts that are filling your head and figure out a new approach.

Start to think out of the box and consider your alternatives.  Think about this line of thinking from Sun Tzu (from “The Art of War”):

“If your enemy is secure at all points, be prepared for him.  If he is in superior strength, evade him.  If your opponent is temperamental, seek to irritate him.  Pretend to be weak, that he may grow arrogant.  If he is taking his ease, give him no rest.  If his forces are united, separate them.  If sovereign and subject are in accord, put division between them.  Attack him where he is unprepared, appear where you are not expected.”

In the book, “David & Goliath”, by Malcolm Gladwell, Gladwell asserts, “Giants are not what we think they are.  The same qualities that appear to give them strength are often the sources of great weakness.”

“He will win who knows when to fight and when not to fight…the supreme art of war is to subdue the enemy without fighting.” – Sun Tzu

After you’ve made the commitment to view the obstacle in a positive light, it will take creativity on your part to come up with another effective plan for reaching your goal.  If the resources you had been using are no longer available to you, what other resources are at your disposal?  Is there another path you can take to get to where you want to go?  Once you determine what resources are available to you, think creatively about how you can use them.

Much of problem-solving is being able to envision ways to use resources in unconventional ways (See Week 12).  Don’t reject any ideas initially. When every idea is taken seriously, you increase the chance that you’ll come up with an innovative solution that will actually work.  Who knows, your new approach may even be better than your original approach, resulting in even greater productivity and effectiveness.  It takes discipline to include what you might consider to be stupid ideas on your list of possible solutions, but do it anyway.  Sometimes giving validity to the ideas we would typically reject allows us to discover a perfect solution.

Do your homework – research what others who have faced similar situations have done.  Talking to a variety of people provides you with a variety of viewpoints.  If you limit your conversations to people who think like you think, you probably won’t get the fresh ideas you need.  Get gutsy.  Talk to people who will shoot straight with you.

Remember, don’t reject any ideas initially.  The path less traveled might be right in front of you but, for one reason or another, you can’t see it.  You just need someone else to point it out and then you can get on your way.

You have to remember that there are often many different ways to accomplish the same result.  In sports, there are a lot of different ways to score a touchdown.  In baseball, there are a lot of ways to score runs.  You have to figure out what you’re up against, and then decide how to find a side door.  Great leaders also realize that their way of doing things is not the only way.  They know to focus on the result and then they let others choose their own paths to get there.

One of the best examples I can think of in finding a backdoor is D-Day.  The Allied forces knew that taking on the German forces head-on was a suicide mission, and they did not think they could afford the casualties that would mount as a result.  Instead, they crafted a plan that even involved fake tanks sitting on the coast of England!  They saw a backdoor in Normandy, France, and they protected that back door.  Then, they went right through it and put “boots on the ground” in Europe.  The rest is history, but as soon as they took back France, the war was over, it was just a matter of time for it to play out.  Eisenhower knew that the front door was a bad option, so he looked for a side door.  He was a great leader, in this respect.

Jesus knew that he couldn’t take the truth straight to the front door, by working directly with the Levites and the Pharisees to deliver the truth to the people.  That would certainly have been the most efficient way, being that they already had their “distribution” mechanisms in place.  Instead, he had to take a different approach, avoiding the front door and instead of going through a side door.  He spread the truth through the fisherman.  I supposed one might refer to it as “guerilla tactics”.  He knew that he would have to use a flanking strategy in order to get the message across to the masses because the religious leaders of the day would block the message from getting across.

Leaders that have a message to spread or an important mission to accomplish will often get great resistance from people in power or status that will be either hurt by this message or accomplishment or perhaps they just prefer the status quo.  Great leaders know that sometimes they need to innovate and go through the side door if they want to get results.