Great Leaders Know How to Set an Example – Week 38 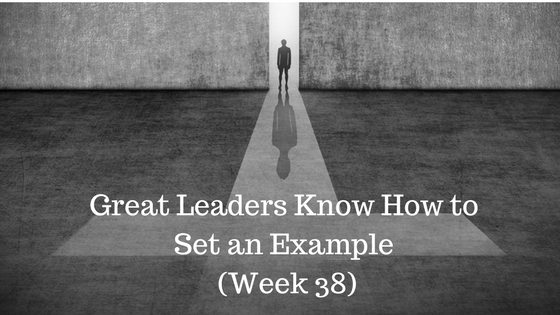 “Few things are harder to put up with than the annoyance of a good example.”

I have four children, all of them are boys.  They rarely do what I tell them to do (hard to believe, I know), but they instinctively and habitually mimic me.  In other words, they do as I do.  This begs an important question.  Why is it so instinctual to resist verbal instructions, yet also so instinctual to mimic the examples set by a leader’s actions?

By observing human behavior in both the present and the past, it is clearly more inspiring and impactful to follow what a leader does, rather than as a leader says.  The old saying, “actions speak louder than words” is most certainly true.

Thinking back to my own childhood and my own father — I listened to what he had to say.  And, after I matured a bit, I have to admit that I realized that he had some wise things to say and that I should pay attention.  However, to this day, I find that the habits and core values I have most inherited from him were from his actions, not from his words.  He showed me about hard work, responsibility, faithfulness to the family (and your spouse), loyalty, self-discipline, integrity, and other things.  He wasn’t perfect, and he still isn’t, but there were things he lived out day-to-day.  Those things had the most impact on me, certainly more so than anything else.  He passed down these things to me by how he acted, not by the dreaded verbal lectures.  I believe this is analogous to how leaders can influence people.

Take a minute and think back on how the role models in your own life acted things out.  Can you relate to this in your own life?  Are there people that you mimic?  Where did you get your own core values from?

Have you ever been in a fitness center and wondered why some of the trainers are fat or out of shape?  Personally, I don’t get it.  It would seem to me that if you want to lead someone or a group of people toward a goal, you should be someone who lives it out.  Or, at least you have a track record of being able to do it.  Elsewise, all you are doing is offering knowledge to someone else and then they have to self-motivate themselves to follow through on that knowledge.  If you want the people on your team to work hard, they have to see you working hard.  If you live it, if you act on it, then you can inspire people to follow your lead.  You can show them that it is possible and that you are yourself living proof of what you preach!

Corporate cultures cannot be formed by HR manuals, policy lists, and mission statements.  The culture is set by the actions of the leadership!  I believe that 100%.  As a leader, don’t preach what you won’t do yourself.  Sometimes, you must engage and set an example at the highest of detail and at the lowest of levels.  Don’t let anyone tell you this is “micromanaging”.  It is not!  Instead, it is correcting something or setting the course of something that is very important.  But, once you set the example, and it has been received by the team, give the wheel back to your team.  Don’t hover over it and be a “control freak”.  That is when you step over into micro-management.  Instead, now is the time to use the skill we talked about in last week’s discussion on accountability.

Another way to use this concept on setting an example is when you find yourself habitually micromanaging a certain process or task.  After you have identified that you are doing this, take a step back and decide why you are micromanaging it.  What is not being done the way you think it should be?  It is likely that you have not clearly set an example of how something should be done.  Remember, if people don’t understand what is to be done, it is impossible for them to do it, and it is impossible to hold them accountable to it.  So, take the time out and show the team exactly how it should be done.  Invest the time to make sure they understand it.  Then, hand it off and let go.

I love how Jesus set examples for us, and thank goodness he did.  In fact, I can imagine him often thinking, “I can’t believe they still don’t get it. We’ve been over this 100 times!”  Have you ever thought that way in your leadership roles?  If not, you’re lying to yourself.  Of course you have!

Jesus took off his garment and used it as a towel to wash the feet of his disciples.  They saw this as being “beneath him” and quickly protested this!  They did not want their Lord washing feet and, certainly not theirs.  Jesus said, “I am doing this to set an example for you.”  There is nothing he could have taught them verbally that would have been as impactful as getting on his hands and knees and going through the ritual of washing feet.  He did this to show them how they are to be and how they are to think.  He did it because he knew he must set an example of what following him really looks like.

When you lead people, always remember that your words are not enough.  You need to act out what needs to be done.  You need to demonstrate. “ Do as I do” is certainly more powerful than “Do what I say”.  Jesus knew this, and this is why he had to demonstrate so many things in the flesh.  This, I believe, is part of the reason God came to be with us.  Because we weren’t “getting it”!