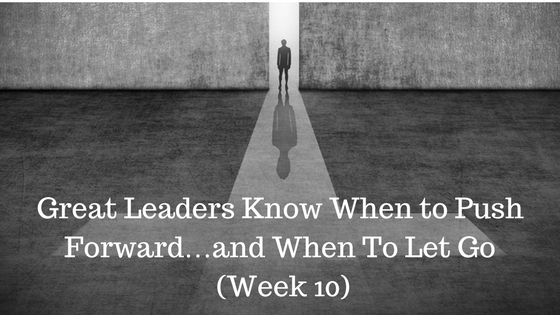 There is a story in the Old Testament that has had a profound impact on me and has been the core focus of some very important decisions I have made.  The story involves a prophet named Balaam who is on a “mission” that, in hindsight, was clearly misguided.  On his journey, the donkey he was with suddenly stopped on the road.  No matter how hard Balaam kicked the donkey, it would not budge.  Without the donkey, Balaam could not complete the mission.  Balaam continued to beat the donkey harder.  An angel then comes and speaks to Balaam, explaining to him that he is under the protection of God and that he would surely be killed should he carry out his “mission”.   Thus, the donkey that he was angrily beating was trying to save his life.  Can you relate to Balaam?

“Letting go” is un-American.  You may be labeled “weak”, or a “quitter”, or some other negative term.  We celebrate and hold high the people that push through and never give up.  We make movies about them.  We give them awards.  We focus ONLY on their perseverance, and not their times of letting go and living to fight another day.  Nobody wants to hear about that.  But, sometimes it takes, even more, courage and wisdom to let go.  Perseverance can be wise and noble on occasion, but it can also be blinding and dangerous.

Consider World War II.  Winston Churchill was definitely not prepared to let go, and he boldly and repeatedly said as much.  Neither was the Japanese emperor.  Same war, same strategy.  England’s stance turned out to be the right one.  And, Japan, I would argue, caused their people much pain and hardship by not letting go.  Thank God they finally did.  I shudder to think what would have happened had a surrender never come.   Now, think of being in the two positions of leading either England or Japan and how hard the decisions had to be.  And, how much was at stake.  Everything, basically.

Personally, I have had many situations in which I found it very difficult to decide whether or not to persevere, or whether to let go and live to fight another day.  I see it as analogous to a war general trying to decide when to push forward and when to retreat.  The most genius war tacticians have made great decisions in this arena, which I believe requires a God-given type of prodigal wisdom.  We have all faced these types of decisions, and we likely face them daily – some have a small impact and others have a large impact.  Whenever we face adversity, roadblocks, or setbacks, we need to evaluate whether it makes sense to press on and persevere, or if it is wiser to pull back and retreat.

I have found that it requires a pause and intentional reflection if you are at a crossroads like this and need to make a decision that has such a potentially large impact.  Business owners have to make this decision at least once, if not multiple times before finally achieving success.  There is no doubt that it requires a lot of grit, hard work, and perseverance to build and run a profitable business.  But, sometimes it is wise to accept defeat and live to fight another day.  How does one decide?  You may be one of the blessed few that find these decisions easy.  I am not one of those people.

Now, Jesus had a lot of opportunities to “kick the donkey”, but he always made the right decision not to.  When the Roman soldiers showed up in the garden to arrest Jesus, Peter quickly sprang to Jesus’ defense and cut off one of the guard’s ears.  Jesus backed Peter down and accepted being arrested.  He knew that it was God’s will and that it would lead to a glorious end.  Jesus could have kicked the donkey all the way along because he didn’t want to be beaten and nailed to a cross.  But, he didn’t.  He knew what the mission was, and he stuck to it.

Sometimes we have a desire that burns so hot that we find it impossible, or even unimaginable, to walk away.  Consider this quote from Victor Hugo (Les Miserables):

They daringly pursue their road.  See them aloft, see them in the distance; they are but black specks.  On they go.  The road is uneven, its difficulties constant.  At each step a wall, at each step a trap.  As they rise the cold increases.  They must make their ladder, cut the ice and walk on it, hewing the steps in haste.  A storm is raging.  Nevertheless, they go forward in their madness.  The air becomes difficult to breathe.  The abyss yawns below them.  Some fall.  Others stop and retrace their steps; there is a sad weariness.  The bold ones continue.  They are eyed by the eagles; the lightning plays about them: the hurricane is furious.  No matter, they persevere.

Hardship is not a reason in itself to let go.  I certainly don’t believe in running away at the first sign of serious challenges ahead.  But, the dangerous part of perseverance is that we can become so attached to the pursuit that we become myopic and we may persevere to our own detriment.  Personally, I believe that the Bible calls this an “idol”, and idols are one of the most dangerous and sinful things we can cling to.  I feel that if you have given it your all and things still are not working, back off and trust that another door will be revealed to you.  Sometimes it’s just about letting go of things you just can’t control and waiting for a better opportunity to come your way.

Now, on the other side of the coin, earlier in his ministry, Jesus did escape the authorities.  And, he did, in fact, walk away.  So, there was a right timing to everything. It’s not that you just surrender yourself as a default.  Certainly not.  Sometimes you bob and weave to survive and keep going, and sometimes you need to surrender and retreat.  Which road to take is the tough decision we all need to make from time to time.  Anyone that does one or the other most of the time, as a default, will be eventually proven a fool.

By no means have I figured this out, but I have tried something that has been helpful to me.  Quite simply, I think deeply and honestly about my motivations for either direction.  Fear, for one example, can be an extremely powerful emotion that you need to learn to recognize. A fear of failure can be especially powerful.  Pride is another example of a powerful emotion.  Pride has caused wars and has been the downfall of many otherwise great men and women.  Greed is yet another powerful driver.  And, sometimes these emotions can work in combinations of each other.

Here is an example of some questions that you might ask yourself in trying to decide whether to “retreat” or “press on”:

These are some examples of some questions that you might find helpful to answer in making a decision in this arena.

I believe that great leaders go through these types of questions in their minds at quick speeds and that it comes very natural to them.  And, once again, they know themselves and who they are.  They know their blind spots and how to consider them when making a decision.

Jesus certainly did not kick the donkey.  And, he certainly knew the exact right time to let go.  There is nothing in the scriptures that would suggest otherwise, on either front.  Any leader could learn a lot from following Jesus’ example on when to persevere and when to let it go.