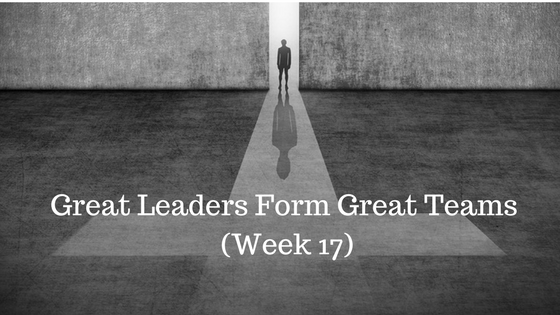 I was born and raised in the city of Chicago, so these quotes have a deeper meaning than they might to people who are not Chicago Bulls fans.  I got to see firsthand how Phil Jackson stepped in and showed how important building a great team was.  The Bulls had struggled to win in the playoffs, even though they had the best player on the planet.  In order to get over that hump and win a championship, they needed a leader to not only build a great team, but also to get the team members to buy in and understand the importance of a great team and to play as a team.  Phil Jackson achieved this, and he got results.  6 NBA championships with the Bulls.  And, then he went on to win more outside of the city of Chicago.

In America, we take for granted the culture that we have of teamwork.  For the most part, I think Americans understand the power of great teams.  Yes, other cultures/countries have similar experiences.  But, many other cultures have gravitated toward the “king of the mountain” culture, and teamwork is more of an unknown concept.  Those cultures tend to not thrive.

There are still leaders that want to try to do it all.  It works for a while, and unfortunately, this provides false encouragement and feedback that they will only get results if they do it themselves.  This stunts growth, leads to burnout, and certainly limits others’ abilities to flourish.  If you do your own research, you will find that almost every empirical/evidential study out there proves that the healthiest and most efficient way to grow is for a leader to build a great team and then empower them to flourish.  The unfortunate truth is that many great ideas, intentions, inventions, and new discoveries go nowhere unless the leader forms a team around them.  Simply put, whomever forms the best team, wins.

There are several major areas that a leader must keep very close tabs on when he/she is forming a team:

The team must have its own identity

I have never named a business after myself, and that’s for a good reason.  I never wanted any business to confuse itself with being an extension of me or my own individuality.  A business needs to have a clean slate and build its own identify from the ground up.  The people on a great team have their own identities, but the team itself must have an identity that is all its own.  The team stands for something different than the individual team members do.  It is made up of the team members, but the team itself has its own persona when all of those individuals are combined.

The team must have strong communication

Interactive communication builds energy.  Energy leads to high performance.  High performance leads to results.  This energy, ideally, should be distributed evenly amongst the team members.  This will ultimately lead to high engagement.  The more engaged each member is, the stronger the team.  One of the most interesting parts of this area is that most studies have shown that both the volume and the frequency of communication actually can have more positive impact than the actual substance of the communication.  One last thing…face-to-face communication is far superior to other forms of communication.

The team must have chemistry

The importance of this is indisputable.  A team either has it, or it doesn’t.  If it doesn’t, break it up and start over.  When a team has chemistry, there is more joy in the work they are doing.  There is more trust.  Trust is something you can’t buy.  It has to be naturally manufactured between people.  People that trust each other can be deeply unified in fulfilling their mission.

The team must have diversity

The highest performing teams have people that think differently and have different life experiences.  A good team has both left-brain and right-brain people.  There must be healthy debate in order to come to the right conclusions.  The team must have people who complement each other, and then the output can be greater than the sum of the parts.

The team must have a defined purpose

The leader must carefully communicate the mission and set the parameters for what will be considered a successful outcome.  The desired results must be clear to the team.  Without it, they are merely at sea without a compass or any sight of land.

A couple things are very clear.  First, the team members must trust each other.  If you have team members that don’t trust each other, you’ll have a bunch of people looking to protect themselves.  They will not put out their necks for the team, which will ultimately cause its failure.  Second, you have to have people on the team that are willing to communicate, and communicate a lot.  They have to enjoy working together and talking with each other.

What about Jesus? Did he form teams – and did he think it was important?  Of course he did!  Once Jesus began his ministry, he wasted no time in forming a team.  That should tell you how important this concept is.  People were very drawn to Jesus, and vice versa.  He intentionally asked people to follow him, and they did.  This also shows that he knew he couldn’t do it alone.  He needed a great team.