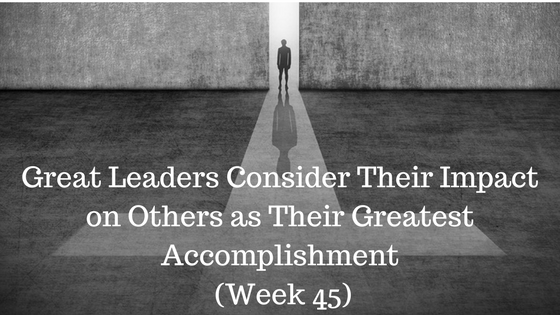 Good people are like candles; they burn themselves up to give others light. – Anonymous

I think it is hard to argue that great leaders have a lot of positive impact on others.  Many great leaders have to do this, by default, to achieve anything in the first place.  However, many leaders are focused more on the results they achieve and base their goals and achievements on “KPIs” (Key Performance Indicators).  These rarely include some sort of measurable impact that you have on people, though that is not impossible.

Some simple examples of some business KPIs might be:

Not that these are unimportant, by any means.  Rather, they are in fact very important.  And, I am not arguing that leaders that achieve BHAGs (Big, Hairy, Audacious Goals) aren’t effective leaders.

Up until this point, I have told you that I am not arguing anything.  Now, I will switch gears.  I would argue that great leaders have the ultimate goal of having the most positive impact possible on the people around them.  They have a deep desire to help, equip, inspire, and enable (in a good way) others to be the best they can be.  When they do this, they get great results, but it’s not WHY they do it.  They do it for a much deeper, even spiritual, sense of personal satisfaction.

I think a real example of this is easily understood by people that have children.  I have 4 sons, and I want everyone of them to grow up and be self-sufficient.  Being a father is a leadership position.  Much of the problem we have in society today is the failure of so many fathers to accept this God-given, natural position of leadership.

Any parent (father or mother) naturally loves their children.  Because of this love, we want to see them do well in life and certainly do better than ourselves.  Some are better than others at raising children, no doubt, but we all want the best for our children.  For me, the greatest accomplishment I can have as a father is to have the most positive, life-long impact that I can have on my sons.  I don’t want them to succeed so I can have trophies to brag about.  I want them to succeed because I love them.  My greatest accomplishment as a father is only to create 4 men that honor their wives, have integrity with all they deal with, and to raise my grandchildren in an honorable way.

If you can agree with this, the next question is – why?  Again, if you have children, you will understand that helping your children succeed – teaching them to read, ride a bike, catch a ball, etc. is a type of personal satisfaction and heart-warming feeling that cannot be replicated easily.

As such, great leaders get this feeling when they have a positive impact on others.  They don’t look at themselves or to superficial “KPIs” as to their greatest accomplishments.  They look at the people they touch and how they impact them.  That is legacy!  And, at the end of the day, I think we all have a natural desire to leave a legacy.

When I was looking around for a good quote to use in this article, I stumbled across this quote from Winston Churchill:

“Success consists of going from failure to failure without loss of enthusiasm.”

I believe, and I don’t think many historians would argue, that Winston Churchill was an accomplished and effective leader.

I looked deeper to see more of his quotes.  I didn’t find what I was hoping to find, but there were a lot of good quotes; some are serious, some are funny.  If you have some time, you should look them up and read them.  I think you will find them entertaining.

Churchill is famous for his speeches about “never giving up”, his attitude in this is still used for inspiration.  I didn’t see in any of his quotes, however, anything about his impact on his own people.  That is, the people of Great Britain.

What I had always believed about England and World War II was that the Germans took a major blow in their entire campaign because of the citizens of England.  They were bombed relentlessly.  It was clear that Hitler’s strategy was to bomb them into submission and a complete loss of any will to fight.  Churchill was able to inspire and create such an impact on his people, that they refused to give in.  Over time, they started to become less and less scared as they kept surviving the attacks.  And, their leader kept them engaged in this mantra of “never giving in”.

So, what was Churchill’s greatest accomplishment?  I would argue that it was his impact on the citizens of Great Britain.  With this, he was also able to create a domino effect that inspired the other Allies to stand up to Nazi Germany and eventually crush it.  The people of England kept it from falling.  If England had fell to German control, who knows what might have happened.  So, if I was Winston Churchill, I would look at the impact that I had on others as my greatest accomplishment.  Maybe he did, we can’t know for sure…

I pray for them. I am not praying for the world, but for those you have given me, for they are yours.  All I have is yours, and all you have is mine.  And glory has come to me through them. John 17:9-10

In fact, he changed people’s lives every time he opened his mouth.  Great leaders know that their greatest accomplishment will be and should be the impact that they have on others.  From this, all good things happen.  Jesus knew this, and he taught us as such.  If you are leading people and not seeing your impact on them as your potential greatest accomplishment, I would encourage you to spend some time really thinking through the WHY of what you are doing.  Take Jesus’ example, a man whose impact on people created a following of billions of people.