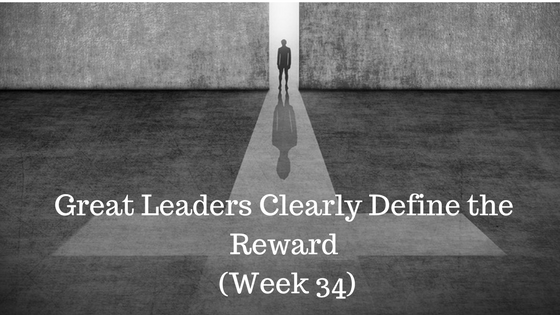 re·ward – noun – A thing given in recognition of one’s service, effort, or achievement.

People are only willing to give up something if they receive something of equal or more value in return.  Leaders who believe people will follow them for no reason, because it is in their job description, or out of fear, are missing a very key element of the human mind.  People will only give up what they currently have if they truly believe that the reward is better.  Great leaders are masters at clearly and simply explaining what that reward is.

The nature of my work allows me to see a lot of different kinds of leadership.  It is not hard to get to know the leader just by talking to the people he or she leads.  It’s not difficult to see the people working out of purpose vs. the people working out of fear or some other type of uninspiring motivator.  Leaders who do not clearly define the reward often have problems with their employees.  Theft, padding hours, pretending to work, not putting in full effort, are all symptoms of people being led without understanding the reward.  Even worse, most of the time the leader doesn’t realize his/her own need to change.  Instead, they see that they need to enforce more control, heavier consequences, and institute more fear mongering.  This leads to a downward spiral.  Only the wise leaders will humble themselves and correct their ways, after owning the illness of the company as their own fault and failure of sound leadership.

On a personal note, I am currently going through a bit of a personal growth period as I write this.  I am looking back on the year thus far, and thinking over the “things that are working” and the “things that are not working”.  This is a normal and healthy exercise, I believe.  Along with this, I am meeting intently with a lot of the Credo associates to try and really dive deep into knowing them better and how their skills and desires fit into their roles and then into the company’s mission (are things aligned or are they fragmented?).

At this point, I can tell you that I have learned three things so far:

Intrinsic rewards are the personal satisfaction you get from the work itself.  Extrinsic rewards would include money, promotions, and other benefits.

Most companies attempt to implement both types of rewards in their compensation structures.

Examples of performance-based rewards are the use of commissions, piecework pay plans, incentive schemes, etc.

Membership-based rewards would include cost of living increases, benefits and salary increase, seniority or time in rank, credentials or future potential.

I am now sitting in front of you reaching for my CFO hat.  I am putting it on right now.  I am stepping up on my soapbox and taking a deep breath.  Here goes:  “Incentives don’t work when they become an entitlement.”

If you are going to use incentives, you better check yourself and check often.  You probably need to make sure to constantly check your incentives and keep them fresh, relevant, and aligned with the company’s mission.  It is all too often that I see incentives become entitlements.  Or, that the economy, business climate, or company evolves, but the incentive structure doesn’t evolve with it.  Incentives are good, but they must be constantly “basted” just like you’re cooking the perfect Thanksgiving turkey.

Another pitfall:  confusing metrics with no clear line of sight, requiring multiple Excel spreadsheets to explain and track.  People should be able to figure out the incentive plan on a paper napkin.  Keep it simple!

Excellence is the Standard

Great leaders don’t require effort beyond everyday job responsibilities to earn extra rewards.  They know that incentives should reward excellent performance in a person’s normal job duties (assuming they are being held accountable to accomplishing their SMART goals).

Pulling this all together – it is certainly spiritually healthy to fear the Lord.  And, by fear, I mean respect.  However, God gives us the ability to either choose Him or reject Him.  He doesn’t try to scare us into loving Him and following Him.  I believe it is because it doesn’t work, and He created us, so He knows that, of course!  He clearly lays out the reward of an everlasting life in Heaven.  This is not only clearly explained, it is repeated over, and over, and over.  He even came to be with us, in the flesh, to drive home the message.  He even showed us what it looked like when someone lives in full belief of the reward to be attained.

Jesus offered his followers the ultimate 401k plan:  eternal life!  Jesus frequently talked about how his followers could increase their reward.  He taught them to build up the treasures they would enjoy in Heaven.  He taught them that he came so that they might have life, and have it abundantly.  His definition of wealth certainly differed from the commonly held belief system, but he clearly defined the rewards to his followers.