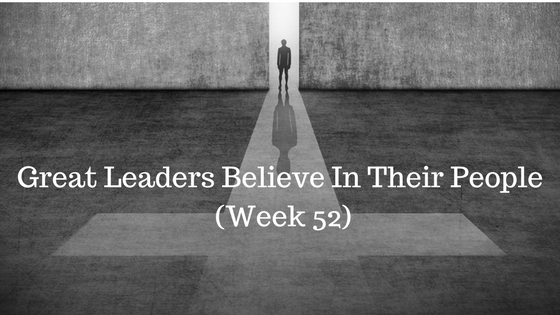 In 1975, a young man who was struggling with what to do with his life returned home from college.  One afternoon, he was hanging out at his mother’s beauty salon when a respected elderly woman visited the shop.  She took her seat, saw the young man and couldn’t take her eyes off him.  Every time he looked in the mirror, he saw her behind him looking right at him.  The woman saw something in the teenager… something he could not yet see in himself.  The woman said, “You know young man, you are going to travel the world and speak or preach to millions of people.”  Then, she wrote those words on a blue envelope and handed it to him.  Her words spoke to his troubled heart, so he graciously accepted the envelope and signed it.  Then, he put it in his wallet so he could carry it with him.

Today, Denzel Washington is one of the biggest movie stars in Hollywood.  In an article published in February 2017, Denzel said the woman’s words really encouraged him when he was starting out as an actor.  Well, today, some 42 years after he received it, Denzel still has it.  That’s how much those words meant to him.

“Our chief want is someone who will inspire us to be what we could be.” – Ralph Waldo Emerson

It almost seems like a universal law that people rise to the occasion when they have someone that truly believes in them.  It’s incredible what a few words of encouragement can do for a person, and how far people will go when someone believes in them.

I love a book titled Balcony People, by Joyce Landorf Heatherley.  In the book, Joyce describes two types of people: “balcony” and “basement.”

Basement people are constantly evaluating and judging others.  With their critical judgments of people’s words and actions, they tear away at people’s souls, wreaking havoc wherever they tread.  They make people feel like they are being compared to some unspoken ideal or standard.

Balcony people, in direct contrast, specialize in the affirmation of others.  They cheer others on and create energy, courage, and confidence in others.  They are genuinely interested in other people’s lives and always believe the best about others.

I have seen these two types when it comes to leadership.  I will admit that there are a lot of basement leaders that get “results”.  They lead by fear, intimidation, and by breaking people down.  This is very sad to me.  You don’t have to operate this way to lead people to getting results.

For reflection:  which kind of leader are you — are you a “basement” leader or a “balcony” leader?  Stop!  Be Honest.

If you are a balcony leader, are you consistent, or do you sometimes fall into the trap of being a basement leader?

I thought about that for a minute, and then I realized that it was, actually, a really stupid saying.  Words can have a much bigger impact on people than physical damage.  Way more!  Why do we so quickly dismiss the profound power of words?

“I can live for two months on a good compliment.”  Mark Twain

I still have to marvel a bit at the people Jesus chose to believe in.  Jesus looked at Simon and told him that now, his name would be Peter.  You see, Simon meant, “the Flaky One”, so that didn’t seem appropriate for a person that would be entrusted to spread the Gospel!

In contrast, the name Peter meant, “the Rock”.  Jesus must have undoubtedly seen something in Peter that nobody else could.  Peter’s record was not great.  His track record described a person that was reckless and impulsive, not exactly the leadership traits you seek out when picking a successor.  Even after 3 years of being with Jesus and learning about love and forgiveness, he quickly chose to chop off a Roman soldier’s ear.  Soon thereafter, during “crunch time”, he denied even knowing Jesus.  Certainly, this is not the behavior of someone named “the Rock”.

All that being said, if Jesus had not chosen to actively believe in his followers, his entire mission would have fallen apart.  Somehow he saw the good in them, their strengths, and he knew that it could be and would be harvested at the right time, in the exact amount it was needed.  He saw what others could not, a skill that great leaders have.

Jesus had no option other than to believe in, or, dare I say, have faith in, the apostles.  Not only did he have this, he had it without reservation, and he told them as such.

Peter went on to preach the good news of equal access to God, even to the “unclean” people of the day.  His controversial work (an understatement if you know the culture he operated in) got him similar results to what Jesus received.  He was also nailed to a cross, though he willingly allowed it, even asking to be crucified upside down.  This strength and courage came from a person that the world saw as “the Flaky One”, whereas Jesus saw him as “the Rock”.

Jesus believed in his staff.  He told them this daily.  His actions were consistent with his faith in them.  They would never have accomplished what they did without this.  We may not have Christianity in the world today without these men that Jesus believed in when others would certainly not have.  Jesus was a great leader, and great leaders believe in their people.