Great Leaders Want to Take Everyone to the Top – Week 43 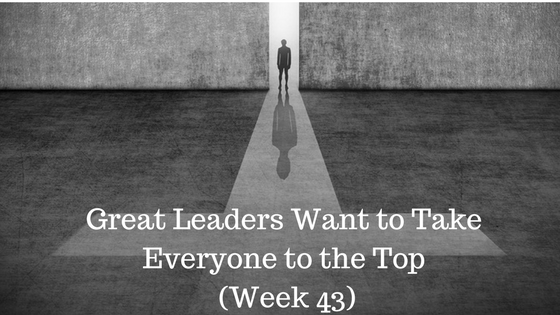 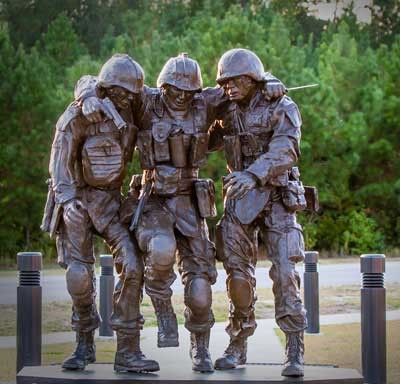 Have you ever heard the phrase, “It’s lonely at the top.”  I am guessing you have.  I’ve had people tell me that before, often times when they are trying to describe what it’s like to own a business or lead a group of people.  I never really understood what that meant, or why that had to be true.  For years, I thought that if you wanted to be a leader or achieve success, you better prepare to be lonely.  How depressing!  I mean, I wanted to be a leader, but I didn’t want to have to be disliked by everyone or to be so uninspiring.  Is that what you have to do if you want to be a leader?

The picture above is a monument that was named “no man left behind”.  This isn’t necessarily in line with the concept of taking people to the top with you – it’s more about not leaving your fellow man behind to die or be taken, prisoner.  Can we apply this to taking people with you?

I believe we can.  I think an organization that is built around a “no man left behind” mentality will most certainly flourish.  This means that we want everyone to stay with the pack, no matter what the climate or destination.  If the destination is merely to survive, then ok, that’s where we all want to go.

We want everyone to have a chance to enjoy the fruits of “mission accomplished”.  Isn’t that what our founding fathers wanted?  Is that not the system they fought so bravely to defend?  Isn’t that the system that so many others have fought to defend?

There is something very powerful about being part of an organization that is committed to not leaving you behind, whether it means to not leave you in peril or to leave you behind when everyone else succeeds.  Think about how you would feel if you’re part of a group that wouldn’t even think about moving forward without you.

I think there are a lot of issues in our society today because most people that succeed could care less about bringing people with them.  It’s the norm, not the exception.  That’s why leaders that embrace the habit of taking people with them are considered great.  They are rare.

Quite often, leaders must inspire people to go to “that place”.  The people may not have the confidence or vision to see what “that place” is.  The leader must lead them there.  But, that’s part of the job.  That’s how you don’t leave people behind.  It’s not always just about being unselfish and just trying to let everyone participate in the success, it’s about inspiring and leading people there.  You can’t drag people with you.  You have to equip them to run by your side.

“No man left behind” doesn’t just mean that you let people share in success, sometimes you have to encourage and inspire change in those people so they feel like they belong there!  Remember, not everyone feels like they belong at the top, or that they deserve to be at the top.  Great leaders can help people overcome that.

Jesus’ last request was that his entire following could go to Heaven with him.  There was a thief who was dying on the cross next to him.  He invited him to join him in Heaven.  He didn’t even like to eat alone!  He constantly invited people to the party (see week 8).  He wanted everyone to be with him, experience joy with him, and go to Heaven with him.  He knew that he couldn’t “leave no man behind”, but he sure didn’t want to.  Everyone was invited!  His entire ministry was built around bringing them all with him.  This was all done out of pure love and not to feed his own ego.  Great leaders love their people and want to bring all of them along.  Jesus’ example (see week 38) is the perfect example of how to do this…