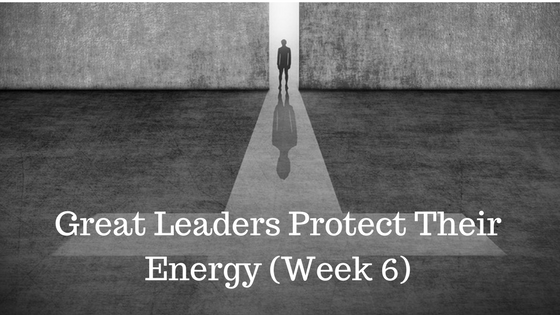 As I started to think about 2017 and set some personal goals, I knew I had one problem that was really affecting my performance as a leader, both in the office and at home.  This problem was, very simply, my energy level (or lack thereof).  When I had energy, I was performing at a high level and had a good attitude that rubbed off on other people.  I was upbeat, encouraging, and positive.  When I didn’t have energy, I was performing just to get through the days, and I was “crabby”.  Certainly, this was not a good strategy for being an effective leader.  I didn’t like this feeling, and I knew that it was not good.  It needed to change.  I also felt strongly that it was the biggest barrier to getting the results I wanted and reaching my other goals.  And, it certainly wasn’t fair to my family, my clients, or my co-workers.  Basically, increase your energy level, and all your goals have a much higher probability of success.

In 2016, I was both honored and humbled to be able to attend the Inc. 5000 conference in San Antonio, TX.  Tony Robbins was one of the keynote speakers.  Personally, I love Tony Robbins.  He is so inspiring to me.  He cuts through all the fog and just tells it like it is.  He has made about a $500 million net worth off just telling the truth and calling it like he sees it.  Novel idea, huh?

At the event, he had people running around, high-fiving, dancing like fools (including me), etc.  It is virtually impossible to have low energy (the plentiful, free Starbucks didn’t hurt either) with Tony leading the charge.  He said that “emotion comes from motion”.  Now, he says that a lot, if you are familiar with him.  So, I thought….yeah, ok, I get that.  Then, quite suddenly, at one point in his presentation, he started to say, “But you know what the number one way to create energy for yourself?…..”  I was on the front of my chair…..like….”yes, tell me, share the secret.  I want to have your energy level!”

Then, he answered his question.  He said the answer is “sleep”.

He was speaking to some of the hardest working, ambitious, driven entrepreneurs in the country.  So, this was a message that was taken with a little bit of surprise, I sensed.  The crowd was like, “Sleep?  Isn’t that what non-successful people do?  Sleep is for whimps!”.  But, Tony knew his audience.  He knew that this answer would pose a strong psychological challenge to the people in the room.

Then, Tony went on to explain that energy levels are so important in driving performance, that the investment of sleep is worth it.  And, although he didn’t come right out and say it, I could tell he was hinting around the fact that everything else is ineffective unless you have good energy.  So, if you have bad energy, you might as well hang it up.  Because nothing else you do will really ever have a chance of getting the results you want!

In this respect, energy is like a bank account.  Sometimes it goes up, sometimes it goes down.  And, when it is depleted, not-so-good things happen.  Not to mention the stress.  If you don’t think energy is that important, go look up the annual sales of energy drinks and coffee.  Then, come back and tell me that people’s desire for more energy isn’t something to be paid attention to!

So, in order to create more energy, one of the easy and free ways to do this is to get more sleep.  I set a goal of hours per week of sleep and believe it is worth the sacrifice of time to get it.  What are some of the other ways that people generate energy?  Some are not healthy, like drugs or other synthetic means.  So, can we now move forward assuming that our energy level is important to our overall performance?  And, that we generally find people with more energy (positive) to be more interesting to be around and that they give more confidence to us that they must have it all together?

Great leaders have a great respect for their energy level and treat it as being precious.  In fact, their energy is more valuable to them than money.

Jesus certainly demonstrated this – he guarded his energy carefully.  Jesus refused to engage in mindless debates with people who wanted to argue instead of learn.  Even at his trial, he didn’t say much.  He knew that it was meaningless to do so.

Have you ever felt that way?  Have you avoided someone or some sort of argument because you were too tired to deal with it?  Of course, you have!  We have all done this.  There are a myriad of things that can drain our energy, and we all know that it does not “feel good” to drain our energy.  When you are tired and mentally exhausted, are you at your best?  Of course not!  I know I have done or said things that I regret later that were mostly attributable to me being tired or totally drained of energy.

Jesus was a teacher, and he did spend energy on teaching God’s word and sharing the good news of redemption.  But, he never wasted time trying to manipulate or beg others to follow him.  You either listened, or you didn’t.  You either followed him, or you didn’t.  He didn’t waste time trying to persuade people or convince them in some sort of a debate.  He did, on occasion, correct some of the false prophets he came across, but that can hardly be seen as a waste of energy.  And, it certainly wasn’t an energy burning argument.

There is a story in the Bible where a woman reaches out and grabs at Jesus’ clothes.  Jesus says, “Who touched me?”  Now, this was strange to his followers because he was in the middle of a large crowd, and they saw many people touching Jesus.  So, they were not sure how to answer.  Jesus went on to say, “I felt power go out from me.”  He then turned to the woman, who asked to be healed.  Her intense desire and faith actually drew on his energy, and he felt that strongly.

Energy leaks are like kryptonite to anyone in a leadership position (or anyone else for that matter).  Leaders must have more energy than others, that is clear.  Some call it “stamina”.   So, they must be more “stingy” with their energy reserves.  After all, they are human, and even Tony Robbins himself can get run down.  And, if they do, because they wield so much authority and influence, the consequences can be pervasive and very negative.

Energy leaks such as angry exchanges, distractions, anxieties, getting involved in someone else’s affairs, are all common examples of things we engage in that drain our energy.  Jesus did not engage in these things, and therefore, he had more energy reserves to fulfill his mission very effectively.

Great leaders know that their energy is to be treasured, and they share it in ways that are in line with their mission.  Leaders must be highly aware that their energy is subject to depletion, just like a bank account is if spending is not controlled and money is not stewarded with care.

Jesus knew that he only had so much energy, and he guarded it to fulfill his mission.  He knew it was precious, and that it could be depleted.  He did not engage in energy leaking types of activities that would make him tired, negative, and/or ineffective.

Leaders could learn a lot by studying how Jesus treasured his energy.