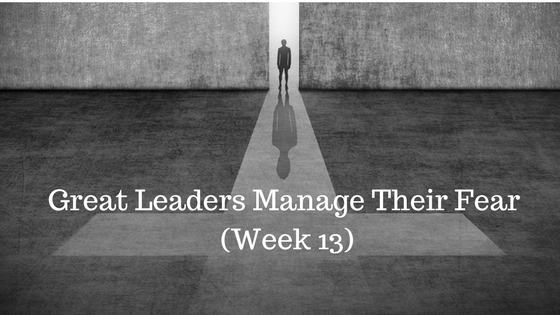 Fear is the nemesis of progress.  When people fall short of their dreams, fear is always lurking behind the scenes.  Lingering and trying its best to remind us of the bad things that “might” happen.

In the book of Proverbs, there is a passage that talks about a foolish farmer that waits for a cloudless sky to plant his fields.  There are always going to be clouds in the sky.  You can’t wait for the “perfect time” to take action.  There will always be things to be fearful of.  Leaders who wait for the “right times” to do everything will stay stuck and will not create progression of their mission.

“Do not be afraid” appears in the Bible 70 times.  In fact, this is the most often repeated phrase in the Bible.  This doesn’t include variants such as “fear not” or “do not fear”.  The Bible isn’t saying, “There is nothing scary, so you don’t need to be scared.”  Let’s be real… life is scary.  However, that does NOT mean we need to be scared of it.  Jesus certainly felt fear, and he felt it intensely.  It was yet another factor that made him human.  When his executioners came to the garden, the scriptures tell us that he was sweating blood.  When it comes to the example that he set, his actions speak much louder than his words.  Jesus knew the best way to overcome fear was to face it head-on.  He never shrank from it, and he never ran from it.  History proves this to be true.

Leaders must face certain fears on a daily basis.  Some examples of common fears that can paralyze leaders are:

I certainly admit to having fallen victim to all of these at one time or another.  Great leaders become skillful at managing their fears.  They learn how to recognize them, identify them, and face them head on.  For example, you might be afraid to speak publicly.  But, is that what you’re really afraid of?  Or, are you afraid of being judged by others, and speaking publicly is a venue that can especially expose that fear?  So, is the fear instead that of being judged by others?  Great leaders know how to dig deep and find the root of their fears.

Here is what I can tell about how great leaders manage their fear:

Remember being afraid of the dark when you were a kid?  Assuming you were, the more often the dark never hurt you, the less afraid you were of it.

I spend most of my waking hours with small business owners and entrepreneurs that face constant challenges.  When it comes to the concept of fear, they all deal with it (I, of course, battle with it as well).  The greatest negative effect I see from fear in their professional lives is:  Overworking.  Certainly, that it is not the only negative result, but in my personal opinion, it is the most pervasive and impactful.  Part of overworking is certainly due to the demands that we have placed on ourselves as a society and the extent to which we believe we have to keep up.  Admittedly, it is expensive nowadays to live in our society, and it is also very fast paced.  It is not unusual to see a business owner working 80 hours a week or more.  Now, I am a realist, so I understand that working a 40 hour week is not always going to be practical.  But, working excessively is driven by fear (fear of failure, fear of negative reputation, fear not producing enough, etc.), and represents a gross imbalance in life’s priorities.  When you work an ungodly amount of hours, you have to sit back and reflect on why.  And, you must go deeper than just one “why?”.  In doing this, when you start peeling away the layers of a behavior that is clearly imbalanced and/or unhealthy, I bet you will find fear at the root.  Even if the root has some greed or pride attached to it, that greed or pride can even be peeled away deeper to find a fear, such as insecurity, fear of running out, fear of loss of reputation, fear of loss of self-esteem, etc.

The fear of not keeping up with the Joneses is an epidemic.  Just visit your local little league field.  Or the summer math camps.  Or ballet class, acting class, music class, etc.  What about the thousands of sales pitches aimed at making you fearful that you’re being left behind?  I bet you have fallen victim to it more than once.  I know I have.

Watch the stock market or real estate market bubble up as people get more and more fearful of being left behind.  Here’s my take on this:  Don’t believe the lie.  Don’t buy into the deception.  Look on Facebook.  Everyone looks happy, right?  It’s an illusion.  Everyone has problems.  Everyone has challenges.  The people that have a successful business?  Or businesses?  A lot of them are on their 3rd marriage or have filed for bankruptcy in the past.  They have children that hate them.   Don’t believe the lie.  Seek the truth and use your own good common sense.  There is nothing more important in this world than your relationships with other people.  Those need to come first.  Don’t let your fears ruin all of that.

I close with some faith talk.  God demands that we rest one day per week.  There is a reason for this.  It is to help us recharge and remind us to keep our lives in balance.  It is not to make sure that others can “pass us up”.   I can tell you from my own personal experience that the people I know that follow this and/or take the proper amount of time to rest are far happier, more productive and more successful than ones that don’t.  More is not better.  Balance is key.  Even God said He needed rest!

Psalm 127:2 says: If God doesn’t build the house, the builders only build shacks.  If God doesn’t guard the city, the night watchman might as well nap. It’s useless to rise early and go to bed late and work your worried fingers to the bone. Don’t you know he enjoys giving rest to those he loves?

The Bible gives us a lot of guidance about our fears and anxieties.  The greatest example was Jesus himself, his actions rather than his words.  Leaders could learn a lot from studying Jesus’ management of fear.