Great Leaders Know That Nobody Wins Until Everyone Wins – Week 46 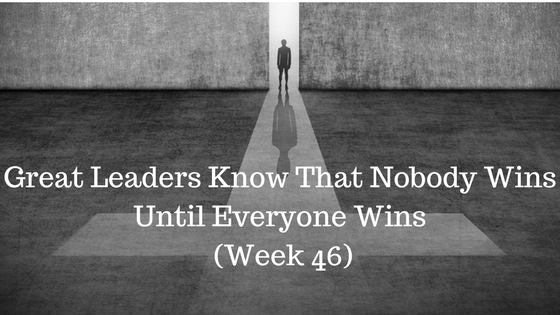 “If everyone is moving forward together, then success takes care of itself.” –Henry Ford

The most successful companies I’ve read about understand that they create the most value when they create a culture of stakeholders that ultimately share in the value they help to create.  This is why so many tech upstarts are committed to granting stock options up and down the ranks.  It’s also why great old-line companies such as Southwest Airlines and Publix Supermarkets are built around an “ownership/stakeholder culture” that shares the wealth with all its people — and shares a variety of real data to help people run the business (transparency).

Back in 1981, at the start of “Reaganomics”, about four million Americans owned shares in the companies where they worked.  Today, the number is estimated as high as 30 million.  There are literally millions of people who are accumulating more personal wealth through business ownership than any other form of wealth outside the value of their home.

“Employees” who are instead stakeholders and also own a big share of their company are more likely to innovate, stay focused on quality, and hold the management accountable.  As industrial-age minded companies struggle under sloppy governance, ineffective leadership and bloated overhead, organizations that build an ”ownership culture” of stakeholders instead of employees in the workplace develop a much stronger position in the marketplace.

I think Michael Jordan matured into this attitude, over time.  There is no doubt he was a phenomenal basketball player, but I think his skills as a leader are somewhat underappreciated.  I grew up in Chicago and was a rabid Chicago Bulls fan when Jordan hit the NBA.  He was certainly exciting to watch.  I can’t remember watching any game where he wasn’t clearly the best player on the court.  And, I think he knew this (not necessarily in an arrogant way, more of a confident one).  I do think he believed that he could win a championship for the Bulls.

But, it didn’t work.  There were just too many other players on the team that he wasn’t bringing with him.  After several years of failure, he realized that he needed to integrate the other 4 players on the floor if he wanted to be a champion.  In other words, he would never win until everyone else did.  I see him exhibiting traits of a great leader because he recognized this.  After he did, it became natural for him, and he won 6 NBA titles as a result (he could have won more).  He got all the other players involved and made them integral parts of the game.  None of them would be able to feel like they didn’t contribute to winning the championship.  Mature leaders understand this.

“Remember, teamwork begins by building trust.  And, the only way to do that is to overcome our need for invulnerability.” — Patrick Lencioni

Ah, now we get down to a sticky area that most leaders don’t like to think about…

I don’t believe it is hard to grasp the concept that teams can accomplish more than individuals, nor is it difficult to agree that it is better if everyone wins as opposed to only one person winning.  Only a fool would think that they could defeat an army by themselves.  So, then, why would someone want to win and not bring everyone with them?  Simple — it’s pride.  It’s a desire to feel important and be admired by others.  It’s not an uncommon occurrence…it is intoxicating for highly-driven, type A individuals.  I know it is for me.  A leader needs to leave this behind…and be conscious of it.  Pride is a very, very dangerous thing.  It creates a self-centric world for people and their decisions will follow.

The desire to get to the top and keep others below you is nothing new, and many leaders have achieved this feat for the short-term.  However, it is easy to see that the people following them were NOT winning.  And, over the long-term, these leaders, of course, didn’t win.  They were merely chasing something that was shallow and unfulfilling.

The opposite of pride is humility – which is more powerful than pride.  And, with humility comes vulnerability.  Great leaders know that they have to be transparent, vulnerable, and humble in order to allow everyone else to win.  Great leaders must be committed to it.  They must conquer pride and leave it behind them.

“If a man owns a hundred sheep, and one of them wanders away, will he not leave the ninety-nine on the hills and go to look for the one that wandered off?  And if he finds it, truly I tell you, he is happier about that one sheep than about the ninety-nine that did not wander off”. — Jesus

Jesus teaches us that a good shepherd cannot rest if only 99 out of the 100 sheep are safe and accounted for.  His quote and teachings were 2000 years before any of the other quotes in this week’s writing.  Certain people grasp Jesus’ teachings, and they flourish and get the real, true satisfaction that can come with great leadership.  Others just have short-term “highs” and then later realize that they really didn’t accomplish as much as they could have, nor did they treat people fairly.

I wonder what the world would be like if all leaders had this approach (everyone wins).  Great leaders are not “great” because they understand this concept.  They are great because they can control and conquer their lust for power, status, and self-admiration (a.k.a. pride).